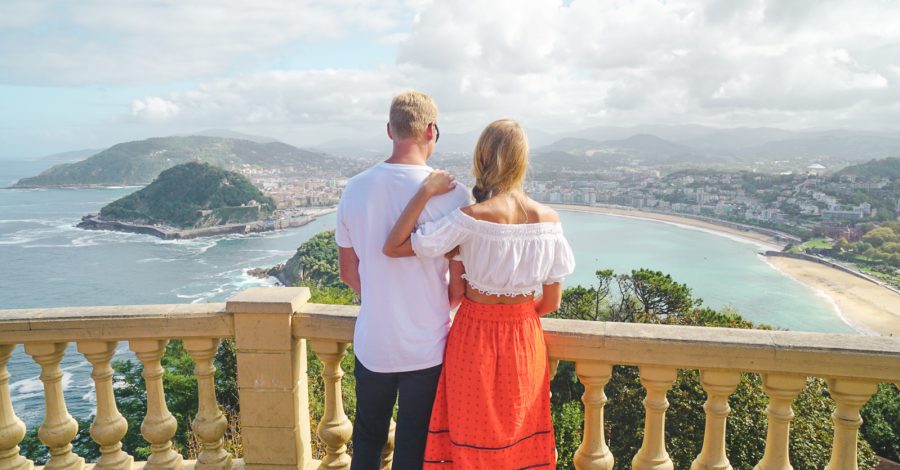 It was Saturday night as we  strolled across the Puente Del Kursaal bridge crossing over the Urumea River from the Gros neighborhood of San Sebastián (a hip younger crowd popular with surfers and American college students) into Parte Vieja, the oldest part of San Sebastián (literally translates to english as ‘old part’).  We were here to navigate and eat at the famed pintxo bars in San Sebastián.

At the risk of looking too touristy we had mapped out where our first stop would be on our self guided pintxo bar hopping evening.  As we turned down Fermin Calbeton Kalea entering the main area of pintxo bars in San Sebastián, a throng of people surged outside of each bar, some crowds larger than others.  We found our first bar of the night, Borda Berri.  Intimidation crept in but we made our way towards the counter and ordered up our first pintxos and glasses of txakoi of the evening.

Keep reading to find out which pintxo bars were my favorite, what else we did in San Sebastián, and where to stay during your visit.

Did you know San Sebastián is only 30 minutes from the French border?  You can easily travel to France! Read my blog post about spending a day in Saint Emilion, France or Biarritz, France (coming soon!)

What is a Pintxo?
A pintxo, pronounced peen-cho, is the Basque version of a Spanish tapa.  A small snack served in a bar usually eaten with bread.  Customers generally eat one or two pintxos at the counter of a bar, where they are on display, and then move on to the next bar to have a few more.

Our first pintxo bar of the trip!  Borda Berri is a pintxo bar/hole in the wall was very crowded with only standing room which thankfully didn’t deter us because this was also our favorite pintxo bar!  We came back on a few different occasion during our stay in San Sebastian.  What we ate: Pork kebab (favorite dish) the creamiest risotto, lobster ravioli, and their specialty the pigs ear which was actually amazing and definitely worth being adventurous and trying!

Just down the road from Borda Berri, Ganbara has its pintxos on top of the bar.  You can tell the bartender or point at what you want or order. Don’t forget to try txakoli, local slightly sparkling dry white wine. It’s so light refreshing and easy to drink!  What we ate: Ham croquette and sausage puff pastry. Both pintxos were OK.  This bar was very popular though so we would come back to try different pintxos next time.

Don’t come to La Mejillonera unless you like seafood and sangria!  This was another one of our favorites.  The bar had so much energy and was such a vibe with empty mussel shells scattered under the bar.  What we ate: mussels tigre, 5-6 mussels cooked in a spicy tomato base sauce and is very delicious eaten with your bread!  I also had the sangria which was great.

Gandarias was definitely more upscale than the rest of the pintxo bars we went to.  The bar had really cool vibes and a more mature and articulated atmosphere.  The pintxos here were double to triple the cost than other bars but the portions were larger.  What we ate: Octopus and pork cheek with mashed potatoes.  Both were excellent but we were starting to get so full!

This bar definitely had a younger vibe.  La Cuchera de San Telmo is a narrow bar with merlot colored walls.  What we ate: Sea scallops (more expensive $15) wrapped in bacon with a corn cream.  A bit salty but very good!  We only got one thing to share since we were so full already!

Txepetxa has a mom and pop feeling.  There are photos covering the walls with celebrities who have come to Txepetxa.  This was definitely a popular bar.  What we ate: they are known for their anchovies, but we had croquets and chorizo.

La Vina is known for their cheesecake and it’s very, very popular!  If you want a slice of the coveted cheesecake don’t come too late as it will be sold out.  What we ate: the cheesecake, obv, but you also need to get the chocolate tort!  The tort definitely gave the cheesecake a run for its money.  Tip: eat them together, you will thank me!  We also tried their meatball and it was great! Highly recommend this bar.

There are some great guided pintxo bar tours as well if the thought of navigating the bars without a local guide intimidates you!

What to Do and See in San Sebastián:

We discovered San Sebastián on foot but be prepared to walk, a lot!  I love walking so this didn’t bother me and we did squeeze a lot in in three days but our walking average was 8-10 miles a day!!

What I Wish We Had Time For:

Where to Stay in San Sebastián:

This Trip Advisor link may help you decide which area is best for your trip to San Sebastián!  The Gros neighborhood on the north side of the river has a younger vibe.  As per usual, we decided to stay in an Air Bnb right on the beach next to the waves.

The oldest part of the city, parte vieja, has a lot of hotels, pensions and affordable accommodation.  We decided not to stay in this area since it is a very popular and busy area of the city.  And in the central area of San Sebastián you can stay on the river or near la Concha beach.

Did you know: when you book a stay from any of the links on TRVL Collective, I earn a small commission which helps keep this blog running and at no additional cost to you!
Thank you for supporting!

« Best Things to do in Ubud

How to Get to Flamenco Beach, Culebra » 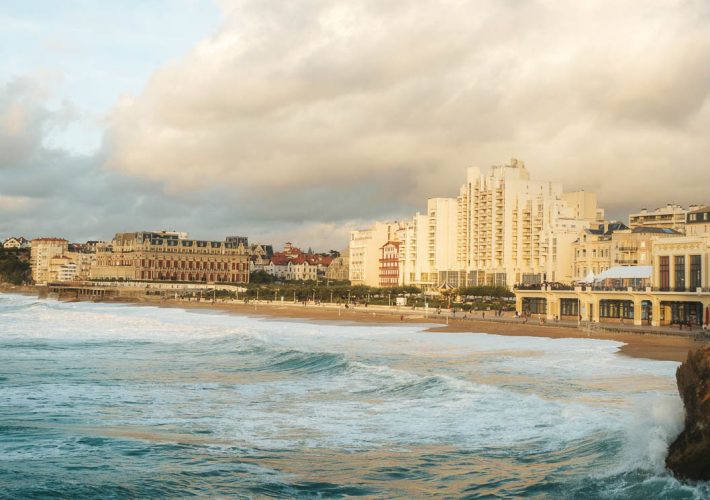 Pingback: A Food-lover’s Guide to the Best European Towns! – Orange Wayfarer on December 18, 2019 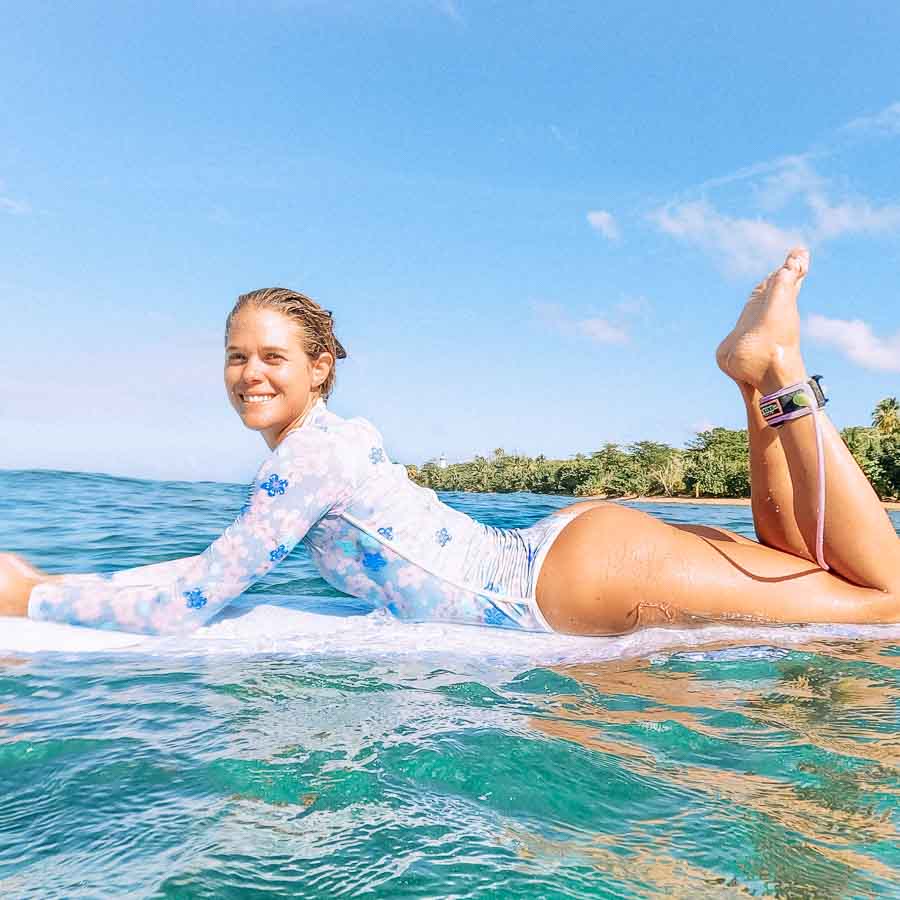 Hi! My name is Ariana and I'm from Montauk, NY. I started TRVL Collective to document my travels to surf destinations around the world with my boyfriend Brent. I love helping others plan their travels so feel free to reach out to me!

Some of my favorite @shopsummerlabel colors and st

Portugals Algarve Coast 🤩 Everything I thought

Having so much fun exploring little towns in Portu

I can’t wait work work with you – I’ll be in touch shortly! 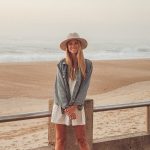